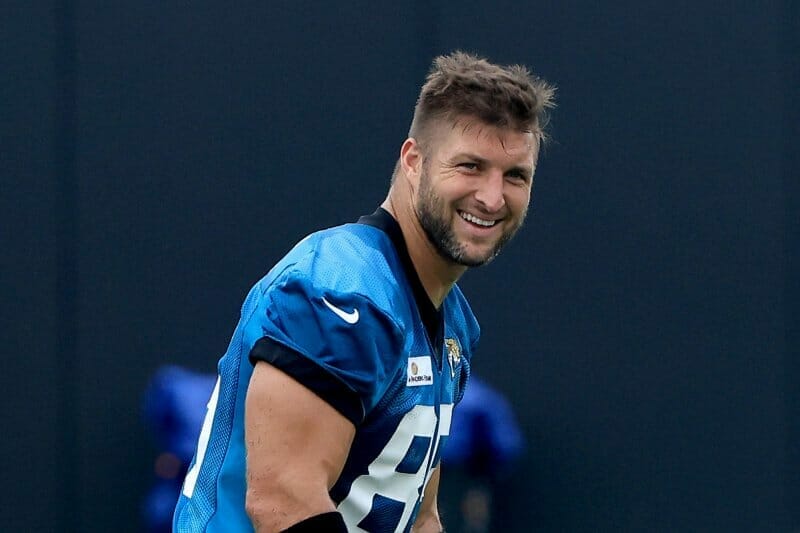 Tim Tebow is a football superstar. He plays for the National Football League team, the Jacksonville Jaguars. In college, he played for the University of Florida as a quarterback. His past NFL teams are the New York Jets and Denver Broncos. Tebow had also played for the New York Mets when he was still in the minor league baseball.

Tim Tebow is also known for openly professing his faith to the public. In addition, he is known for kneeling in prayer on the football field.

Tim Tebow as an Evangelist

The parents of Tim Tebow are both evangelists. They passed on their passion for missionary work to their son. Tim visits the Philippines to perform his evangelical work. He preaches at villages and schools while providing medical assistance to the less fortunate. This country is close to his heart because his parents were also evangelists in the Philippines in the past. He was born in this country. As a teenager, he also visited the country to assist in his parents’ evangelical works. Tebow has a team of more than forty evangelists working in the country.

Tebow has also started his evangelical work in the United States. He visits schools and prisons to talk about his faith. In addition, he also preaches at conferences and youth organizations. Tebow is a leader at the Fellowship of Christian Athletes. This organization imposes that all of its leaders agree to the Statement of Sexual Purity. They profess that homosexuality and premarital sex is not acceptable in the eyes of God. Tebow has been very vocal about abstaining from sex. He claims that he only engaged in sex after his marriage.

Net Worth and Salary

The net worth of Tim Tebow is $5 million. His annual salary is $1.6 million. Tebow is also a famous endorser of various products. Thus he earns a substantial amount from his endorsements.

Tim Tebow is not gay. He is, in fact, married to Demi-Leigh Nel-Peters. His wife is former Miss Universe 2017 and a model from South Africa. They were engaged in 2019 and later got married in 2020. Their wedding was held in Cape Town, South Africa. The couple does not have a child yet as of now. Although, they certainly have plans of having a baby soon. They have just celebrated their first year of marriage.

Tim is an evangelical Christian which is also the religion of both his parents. So he was exposed to evangelical work at an early age. Tebow has become famous for being very open about professing his faith. For example, he takes to his knee before each game with his head bowed in prayer. Tebow also often shares Bible verses. His favorite verse is John 3:16, and he even had it written on his face during one of his games.

Tim Tebow created the Tim Tebow Foundation to help kids with medical conditions as well as orphans. He has always had a soft spot for children with special needs or deformities. This is the result of a life-changing experience he had while on a mission trip to a remote village in the Philippines when he was a teenager.

He met a physically deformed boy named Sherwin. His feet were on backward, and the villagers said he was cursed. Tebow held Sherwin and showed the villagers that he is also a child of God even if he was deformed.

This event inspired him to start the Tim Tebow Foundation. The foundation runs with a primary mission of bringing faith, hope, and love to those who need it most. They conduct outreach and missionary programs to the most impoverished communities in the Philippines. They also assist in the adoption of orphans.

The height of Tim Tebow is 6 feet and 3 inches. His weight is 106 kilograms. The body measurements of Tebow are 50 inches for his chest and 36 inches for his waist. He has spent most of his life training as an athlete, so it is just natural that he has a fit and buff athlete. Just like any other athlete, he has a strict exercise and diet regimen.

Where is Tim Tebow from? Where is He Now?

Tim Tebow was born on August 14, 1987,  in the capital city of the Philippines, Manila. His parents were based in the Philippines as missionaries at that time. Tim was the youngest of five siblings. They were all homeschooled because their family traveled a lot.

Their parents also did not want them to get confused with the religion being taught in school.

When Tim was three years old, the Tebow family returned to Jacksonville, Florida after completing missionary work in the Philippines.

In high school, he played for the football team of Trinity Christian Academy. Later on, he moved to the team of Allen D. Nease High School. That was the early beginnings of his football career. Tim played for the New York Jets in the past. The team released him after a serious injury.

He broke two of his ribs during a game. His last team was the Philadelphia Eagles, where he played for one year. Today, Tim Tebow has just signed up with the Jacksonville Jaguars on May 2021. Tebow has not played professional football for six long years.